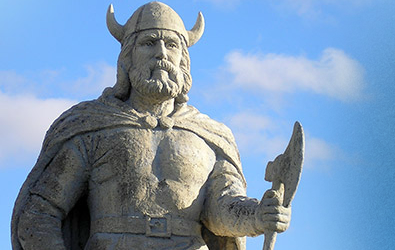 GIMLI, MAN.—Smack dab in the middle of Canada, on the shore of the picturesque and sometimes stormy Lake Winnipeg, sits a small town with a very large concentration of people of Icelandic heritage.

People in Gimli and surrounding communities such as Riverton have worked to maintain Icelandic culture — the language, the music, the literature and more. Many can trace their roots back to the first wave of immigrants who fled poverty and volcanic eruptions in their home country and faced harsh winters and disease on a stretch of land that offered them the chance at decent farming and fishing.

The area offered to the new arrivals was just north of what was then the Manitoba boundary (before the province expanded). Now just an hour’s highway drive north of Winnipeg, the area was remote at the time and required travel by boat.

“I did have some ancestors come on the original journey in 1875,” Peter Bjornson says. Bjornson grew up in Gimli, sang in the Icelandic choir, taught at the local school and later represented the area in the Manitoba legislature.

“My parents, even though they were born in Canada, both of them, their first language was Icelandic until they started attending school.”

The Icelandic culture is evident when you arrive in Gimli, a town of roughly 2,200 people with thousands more in the surrounding area.

A large statue of a Viking is a popular spot to take pictures and start a lakefront walking tour. Islendingadagurinn — the annual Icelandic Festival of Manitoba, held here every summer — brings the area’s rich heritage to life. And the New Iceland Heritage Museum, open year-round, tells the story of the area’s development.

“We have 3,500 artifacts that are donated by local families and families of immigrants that came. They’re all treasures,” says Julianna Roberts, the museum’s executive director.

Come and travel through time at the 54th Manitoba Highland Gathering! Wear a wee bit o’ the Tartan […]

GAC has played a vital part of the growing arts community in the Interlake since 1969. Over 60 […]

This award-winning museum was acknowledged as a ‘must see’.The Exhibit about the famous emergency landing of a jetliner […]

November – December 2019 Fresh baking made from scratch, in house, every day. Come in to see our daily offerings, or to pick up an old...

Smack dab in the middle of Canada, on the shore of the picturesque and sometimes stormy Lake Winnipeg, sits...